Rhythm is the cure

Rhythm is the Cure is a 7-day intensive healing workshop featuring Southern Italian ritual dances used as music and dance therapy for centuries throughout the Mediterranean. Participants will learn the unique style of tambourine playing and the ancient healing trance dance of the tarantella, used to cure the mythical bite of the tarantula.
This workshop focuses on releasing blockages of energies, and break the imaginary “spiderweb”
of the subconscious mind.

Through this work, Alessandra has helped transform many people’s lives through the years.

The objectives of the workshop are:

Student will learn the following ritual dances and rhythms:

This elegant and sensual dance from Naples is performed by couples playing castanets to the rhythm of the large drum, called the Tammorra. The dance movements have a strong Spanish and Middle Eastern flourish, with many recognizable movements of the Flamenco and Belly Dance traditions. These movements are set to the beat of African 4/4 rhythms. The Tammorriata is based upon an improvisational style of drumming and singing usually enacted during the summer rituals in honor of the ancient Earth Goddess Cybele, and later, the Black Madonna.

This erotic and dynamic ritual dance originated as a cure for the mythical bite of the Tarantula, a condition causing a mental disease called tarantismo, which afflicted mainly women (tarantate) in Southern Italy. The wild rhythm of the Pizzica, played on medium size tambourines and accompanied by dance was performed as an exorcism ritual which produced a trance-like state beneficial for the healing of many disorders and imbalances. As part of a re-enactment of this healing ritual, Alessandra will lead the participants in a circle dance accompanied by her magic  tambourine 6/8 rhythm and singing. During the ritual each student will learn the steps of the Pizzica, which means “ bite,” building up to a culmination where each student will enter the circle and lay down upon a white sheet, surrounded by red ribbons, and emulate “Spider” like movements on the ground, releasing stress and blockages of sexual energy, as well as opening the heart and throat chakras. The dance comes to completion as each participant dances their way out of an imaginary “Spider Web.”

This is a Renaissance folk dance which is done in pairs which is very popular in Italy and throughout the Mediterranean. It contains both fast, energetic steps and combined arm and leg movements which improve coordination. This invigorating dance had been called by Alessandra’s students ‘Italian Aerobics”.

This dance originating in Calabria during the Middle Ages evokes the elegant and meditative movements of the Whirling Dervish ceremonies of the Sufis. This dance was used during the time of the plague to heal people and as a release from overpowering fears of death. Due to the trance-inducing movements and incessant spinning many people enter ecstatic states during this dance. The session ends with a meditation utilizing a chant to the Sun, Jesce Sole, in the Lydian scale. The calming and lilting harmonies of this chant combined with the ocean drum guides students into complete relaxation. Participants emerge feeling light and joyful after this healing journey through sound and dance…

During the week in Tuscany, each morning before Alessandra’s drumming and dancing teachings, Gaia, owner of La Chiara di Prumiano, will lead special puppet-making workshops.
Participants will chose a Tarot card at the beginning of the week, whether a Magician, a Star or the Moon, and will work with that card’s symbolism as they create their own puppet representation.
Using colorful fabrics, paints, feathers, and flowers, participants will create their unique puppets to take home as part of their transformational experience.

Gaia comes from a lineage of master theatre artists and has developed her own style of Tarot Puppetry. Truly a unique opportunity! 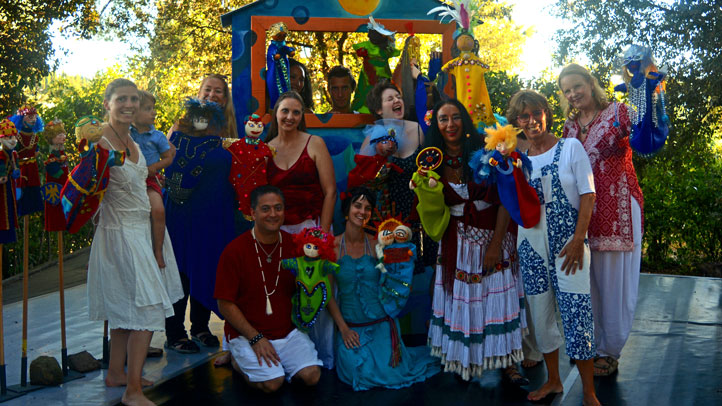 👋 We are waiting for You! 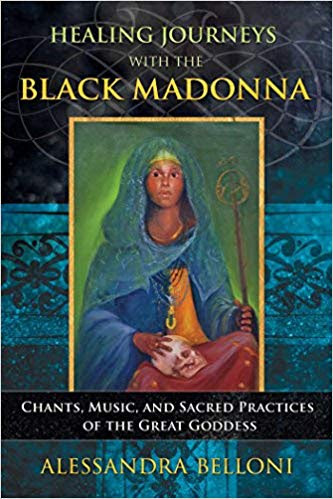 Featuring special guest, and best selling author of “The Hidden Spirituality of Men,” Rev. Dr. MATTHEW FOX. Writer also of the book’s forward, and the foremost proponent of creation spirituality (based on mystical teachings of Hildegard von Bingen, Meister Eckhart and Saint Thomas, among others), will be joining us for this event and giving a talk.
featuring healing chants, ritual drumming and trance dance ceremonies that are found on the CD accompanying the book.

ABOUT THE BOOK, “HEALING JOURNEYS WITH THE BLACK MADONNA”

Alessandra Belloni’s book, “Healing Journeys With The Black Madonna,” is the product of more than 35 years of research and fieldwork at sacred sites around the world. Belloni takes the reader on a mystical pilgrimage of empowerment, initiation, and transformation, explaining how her love for Italian folk music led her to learn the ancient Tammorriatamusical tradition of the Earth Goddess Cybele and the Moon Goddess Diana, leading to her discovery of the still-living cult of the Black Madonna in the remote villages of Southern Italy. Sharing chants, rhythms, and sacred songs, accompanied by 12 audio tracks, Belloni details how she uses these therapeutic musical and trance practices to heal women and men from abuse, trauma, depression, and addiction and shows how these practices can be used for self-healing and transformation, including her personal story of using the Tarantella to overcome cervical cancer.

The concert features music from the book’s accompanying CD. Selections to be performed include:
an ancient chant to the Black Madonna of Montevergine (Avellino) from the region of Campania known as Mamma Schiavona and the ritual drumming in her honor knowns as TAMMORRIATA.
new original compositions by Alessandra Belloni dedicated to the Earth Goddess, the Yoruba African Orishas (Ochun, Yemanja), the Black Madonna of the Gypsies (from France) and the Mary Magdalen. 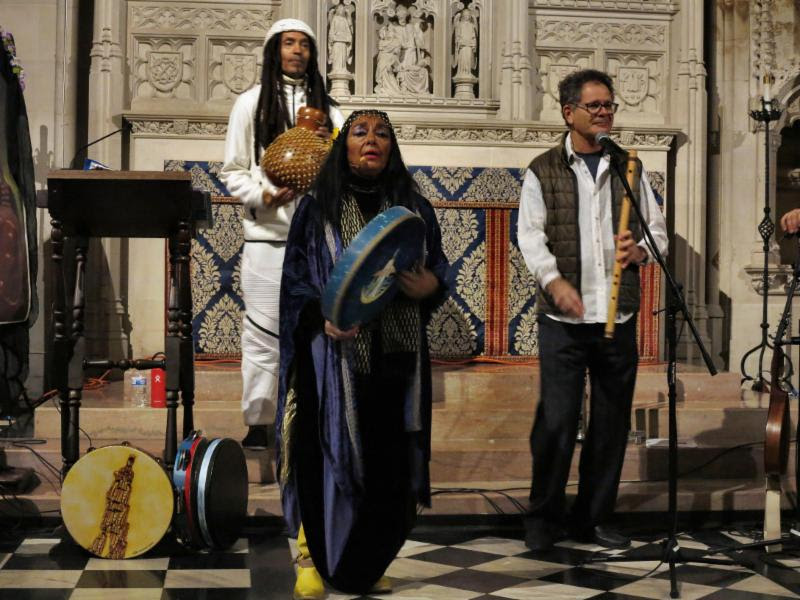 Alessandra will reveal healing traditions of the still-living cult of the Black Madonna of Southern Italy, that are just as powerful and revered today as they were a millennia ago. In this workshop, we will learn how to honor the Black Madonna using the musical and dance tradition called the Tammorriata, a sensual dance which can be used to heal sexual blockages. We will be taught devotional drumming, playing of castanets/ tambourine, tribal dance moves, and shamanic chants and prayers. These ecstatic trance dances are a powerful, transformational tool for self-healing.
Note: Wear white clothing. Dancing will be barefoot or in comfortable dance shoes; bring a frame drum (some Remo drums will be on-hand) and a tambourine. The workshop will be followed by a book-signing of Alessandra’s new book/CD: Healing Journeys with the Black Madonna.

Book Presentation:
Alessandra will speak about her personal healing journey with the Black Madonna and her unique research that led her to write the book. Learn about the myths, legends and rituals from the Southern Italy and the Ancient Sacred Sites of the Black Madonna. Books will be available for sale and signing.

The presentation will be followed by Sacred Chants and a Ceremonial Dance and Drum workshop
sharing some of the traditional sacred healing chants, dance and drumming in honor of the Black Madonna, that are featured in the book.

More About The Workshop:
Participants will be taken on an enchanting journey of discovery of the seven Black Madonnas, following the ancient Neapolitan legend, known as the “Seven Sisters” in Southern Italy. This trip into traditional legends, miracles and history, transports audiences to a time and place where an unbroken and ancient tradition continues today with processions, drumming rituals, chanting and sensual dancing in honor of the Black Madonna of Montevergine, who is considered the most important of the seven sisters. She continues to be venerated on a high sacred mountain, which pilgrims still climb barefoot while chanting and drumming in her honor.

Healing Chants, Dance & Drum Techniques:
Chants and prayers to the Madonna of Montevergine (Avellino), and La Madonna della Libera (Moiano Benevento), which are both featured in separate chapters in the book., will be taught These ancient healing chants use the Lydian Scale or Neapolitan scale to invoke the healing power of the sun and moon, and the Earth Mother and Mary Mother of Jesus.

Alessandra will also teach a hands-on frame drum workshop of the tammorriata, a 4/4 rhythm of African origins, based upon an improvisational style of drumming and singing usually enacted during the summer rituals in honor of the ancient Earth Goddess Cybele, and later, the Black Madonna. The drumming workshop will be followed by the ceremonial dance of the tammorriata, an elegant and sensual dance from Naples performed by couples playing castanets to the rhythm of the large drum. The dance movements symbolize love making and date back to ancient fertility rites of pre-Christian origins.

Participants in this workshop should be barefoot, and women should preferably wear skirts, and if possible everyone should wear white clothes. The sessions are held giving the students the feeling of being part of the “ritual.” Drums will be made available by REMO through Alessandra Belloni, a Remo artist with her line of signature series tambourines. 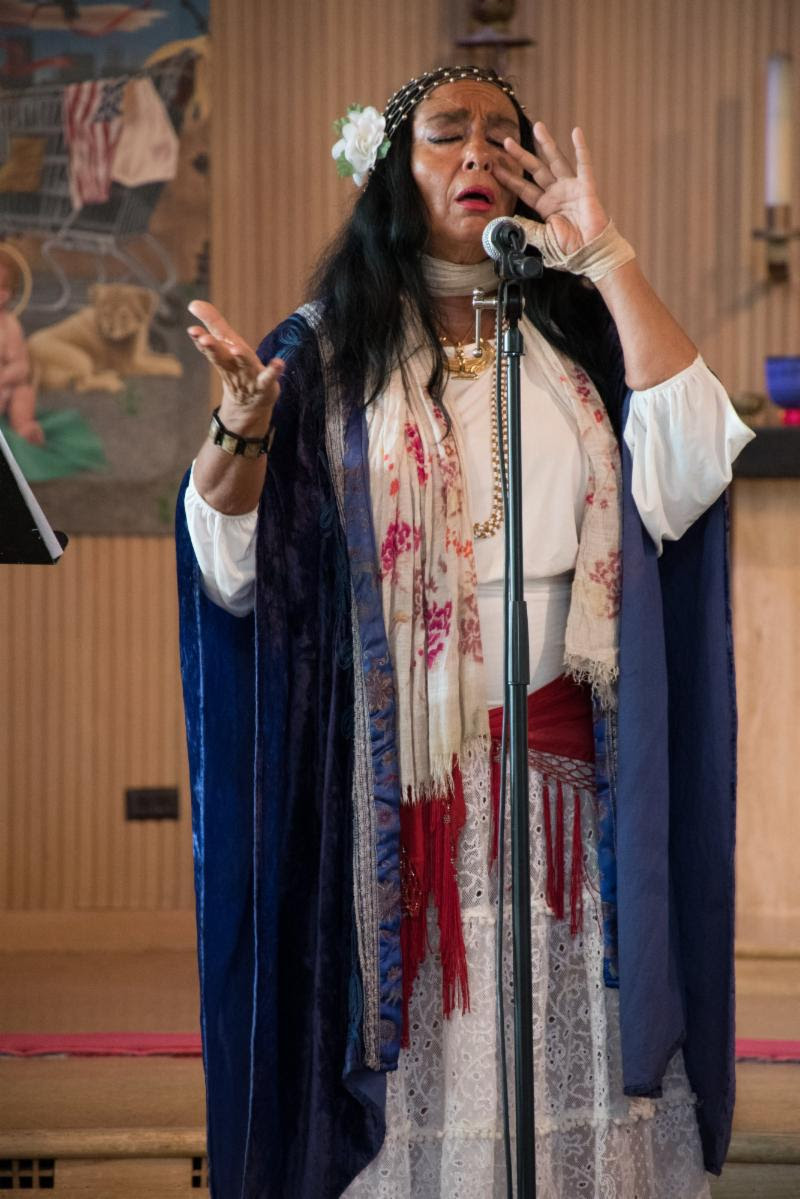 Chant to the Black Madonna of Seminara Calabria ‘VIGUNTO I LUNGA VIA” from Alessandra Belloni;s book launch HEALING JOURNEYS WITH THE BLACK MADONNA at the Cathedral of St John the Divine march 19 2019
VIGNUTO I lunga via https://youtu.be/GwpyXTZWPWY
Canto di Ochun://youtu.be/Dg4FHJ13_rw